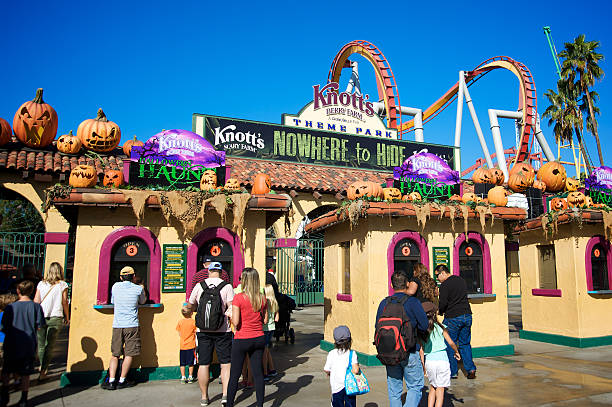 If you’re looking for a great theme park holiday for Halloween where the whole family can enjoy, then there’s no better place than Southern California. The area has lots of fantastic amusement parks, and many of them offer unique thrills once Halloween season rolls in.

For Halloween, try the following theme parks for your family:

The place (Legoland) is hopping wild throughout the month of October, especially on Saturdays after 3pm. Then you get family-friendly parties filled with trick or treat stations, character meet-and-greets, wandering performers, games, live shows, various Halloween décor and crafts, and even dance parties.

Bring out the kids, and fun is basically guaranteed. There will be no running out of candy, not with more than 1 million pieces of candy available along with special bricks as well.

On certain days from the middle of September to right after Halloween, Six Flags becomes a Halloween party filled with ghouls, zombies, and other scary monsters. You’ll need a separate ticket for these attractions, and that’s not even counting the mazes.

Even while the sun is still out, you get spooky stage shows, scary props and décor, and rides are modified to be even scarier. But things are still reasonably family-friendly. But things get even more frightening at 7pm. that’s when you have various frightening monsters roaming the scare zones, and the terrifying mazes become open to the public.

With Knott’s Scary Farm, you’re enjoying the world’s first Halloween-themed park event. And they’re still going strong, as there’s almost no space in the area where you will feel absolutely safe from terror. There’s more than a thousand lurking demons spread out all over the place just waiting to scare the crap out of you. Plus, you have live shows and spooky haunted mazes as well.

This is really not for very young kids, so it’s better for the family if you only have teenagers with you.

The Knott’s Spooky Farm even is for the younger kids, though. It’s a daytime family-friendly party meant for kids ages 3 to 11. You have trick or treating ion Ghost Town, live shows, costume contests, and other milder attractions.

You may enjoy this even on certain nights from mid-September to October 31. You get terrifying live shows and scare zones that will really creep you out, haunted houses that seem so realistic, and mazes with themes from movies and TV shows like The Exorcist, Freddy vs Jason, and The Walking Dead.

The whole thing is terrifyingly intense, as no other park can match the almost authentic feel of the special effects. the blood and guts everywhere just seem too real. This is not for kids, and even teenagers might be too frightened unless they’re real fans of horror.

This is the theme party this year, succeeding last year’s Mickey’s Not-So-Scary Halloween Party.This is the Halloween party event that requires a separate ticket from general admission. You and your family get all types of spooky fun, such as fully immersive treat trails.

The whole Disneyland Halloween Time is actually fantastic. The theme rides are modified for Halloween, and the whole place is awash with Halloween décor. There’s trick or treating, the Halloween Screams fireworks, and various events and parties. With so many fun things going on, the special Halloween party isn’t absolutely necessary for your family to have fun here.

Still, the tickets for the upcoming Disneyland Oogie Boogie Bash will probably sell out quickly, so buy the tickets fast if you do want to check it out.

QUICK REMINDER: AMUSEMENT PARK PRICES PROVIDED ON THIS WEBSITE ARE AVERAGED AND SHOULD ONLY BE USED AS ESTIMATES.