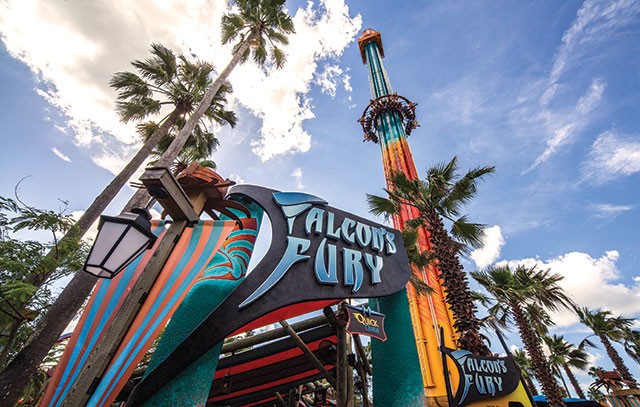 Even if you’re an ardent fan of roller coasters, you can’t argue that some rides are extremely fun even if they’re not roller coasters. They can involve a lot of spinning, drops, and lots of high tech, but boring isn’t part of the experience with some of these rides.

To make sure you get the fun you deserve, try out the following rides:

Falcon’s Fury at Busch Gardens may not be the best choice for those with a fear of heights, unless they’re willing to try some shock therapy. Let’s start with how this attraction is the tallest freestanding drop tower in the entirety of North America. At 335 feet high up, it’s not joke.

At least you have a minute to reach that high up in the air, so you have time to appreciate the view (while you contemplate your approaching doom, if you’re afraid). A drop from such a height is certainly scary enough. But in this case, they pivot the seats by 90 degrees, so you’re dropping to the ground, reaching 60 mph, while you drop facing the ground!

First off, the name Splash Mountain at Disneyland means you will get wet! That’s a given, as the ride involves almost a million gallons of water. You get inside a hollow log, and then you float along the water as you follow Br’er Rabbit. But keep in mind that Br’er Bear and Br’er Fox are also on the chase.

You’ll then encounter up to a hundred audio-animatronics critters, and they’re all singing, talking, and telling stories. It’s basically a musical cruise, and of course, you can sing along to the many Disney tunes. The ride involves 3 dips and a 5-story drop to a splashdown!

Now this is one heck of a video game, or is it a ride? Each vehicle comes with laser guns for everyone, as you all go zooming all over the place, you’re supposed to fire at the space aliens about to attack Earth. With some 120 different species of aliens to go against, it’s one heck of a space laser fight. Individual scores are even tracked, so you know which one in your group is the best. You might even be recruited to MIB!

This ride launched in 2017, and it sure didn’t take long to become one of the top favorites at Animal Kingdom. It’s one heck of a 3D experience, as it really feels like you’re flying your own winged mountain banshee as you go through the fantastic landscapes of the planet Pandora.

The Twilight Zone Tower of Terror at Disney’s Hollywood Studios

Even if you’ve never watched that classic 1960s TV series, you’ll still be spooked by this ride. You tour a super-creepy hotel, and then you’ll ride a service elevator that will get you to the total darkness of the 5th dimension.

The elevator door will open several times along the way, and you’ll encounter ghosts and other spooky things. There are breaking windows, wind effects and lightning flashes. At the end, you’ll experience the elevator suddenly dropping at a rate of 39 miles per hour.

Star Wars: Rise of the Resistance

No matter how much you disapprove of the Disney versions of Star Wars, you can’t really complain about this terrific ride. Now you’re joining the fight against the First Order, with a lot of use from the motion simulator and the drop ride system. What’s more, the entire experience lasts for a full 18 minutes—you can’t say that it’s a short time of fun!